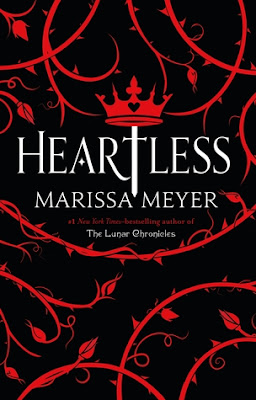 Book Description: Long before she was the terror of Wonderland — the infamous Queen of Hearts — she was just a girl who wanted to fall in love.

Catherine may be one of the most desired girls in Wonderland, and a favorite of the yet-unmarried King of Hearts, but her interests lie elsewhere. A talented baker, all she wants is to open a shop with her best friend and supply the Kingdom of Hearts with delectable pastries and confections. But according to her mother, such a goal is unthinkable for the young woman who could be the next Queen.

At a royal ball where Cath is expected to receive the king's marriage proposal, she meets Jest, the handsome and mysterious court joker. For the first time, she feels the pull of true attraction. At the risk of offending the King and infuriating her parents, she and Jest enter into an intense, secret courtship.

Cath is determined to define her own destiny and fall in love on her terms. But in a land thriving with magic, madness, and monsters, fate has other plans.

Lady Catherine Pinkerton is the daughter of a Marquess. All her parents want is for her to marry well. All she wants is to open a bakery with her best friend. Although she has no money of her own and no way to get any without her parent's (unlikely) blessing, Cath is not going to give up on her dream. Then Cath meets the new court joker at a royal ball and she finds a second thing her heart desires. The only problem is the King of Hearts has planned to propose to Cath at the ball (she had no idea), and her parents would never agree to a match with Jest anyway. But, still, Cath is determined to follow her own path, even if fate seems to have other ideas.

I'm always wary of origin stories. I'd rather go forward than back and they don't usually end happily. I mean we've all met the heartless queen from Alice's Adventures in Wonderland in either the original or an adaptation. No way could this end well. But I love Marissa Meyer's retellings and grew up reading Alice, which means I was determined to give this book a go. Well it was just as heartbreaking as I guessed it would be. But also gorgeously written and wondrously enchanting. This book makes impossible things possible, and it's pretty impossible that I - an HEA girl - read and loved this. But I did.
For me Heartless is a nostalgia fest. It is filled with all of the absurdity you'd expect of a story set in Wonderland. I enjoyed being back down the rabbit hole, meeting Wonderland's citizens again and seeing the way this story brought in Chess from Through The Looking Glass. It also felt nostalgic that Meyer set her tale in Victorian time, as it was when Carroll penned Alice.

But this story is also something entirely it's own, and I loved Cath's voice. I believed her desperation to own a bakery and how stuck she felt in her present life of privilege. I wanted her to find her own future, even while feeling dread about her fate being predetermined. I was caught up in her gloriously achy relationship with Jest. He had me at guyliner, but I loved getting to know who he was, and seeing the way they both changed from knowing each other. Although I wanted to scream noooooooo! at times (especially near the end), I understood Cath's choices, including at the end. This book made me laugh and gaze in wonder. It made my heart swell and beat faster. And then it broke me. But it was all beautifully done.

Highly recommended. I would read anything Marissa Meyer writes. But please, a different ending next time.

Love Triangle Scale: Feelings wise, none. Cath does get herself entangled in an engagement to the king, although she does not feel anything for him.
Cliffhanger Scale: Standalone 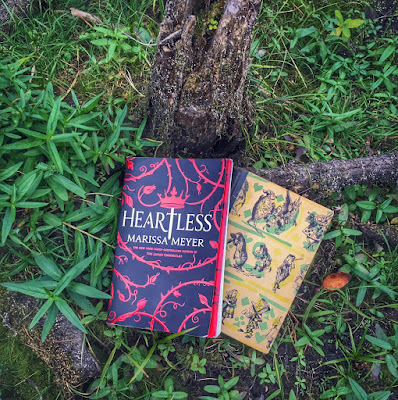 Heartless next to my much loved copy of Alice.

Marissa Meyer is the USA Today- and New York Times-bestselling author of the Lunar Chronicles: Cinder, Scarlet, Cress, Winter, Fairest: Levana's Story, and Stars Above: A Lunar Chronicles Collection. She lives in Tacoma, Washington, with her husband and twin daughters. 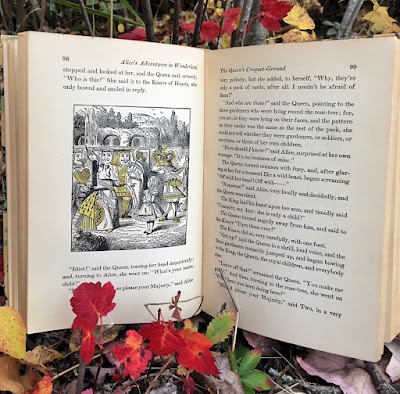 An illustration of the King and Queen of Hearts from my copy of Alice's Adventures in Wonderland
Posted by Lauren @ Love is not a triangle at 12:00 AM