Today, I'm excited to be participating in the Mighty Jack blog tour, sharing thoughts on the book, as well as some favorite fairy tale retellings. 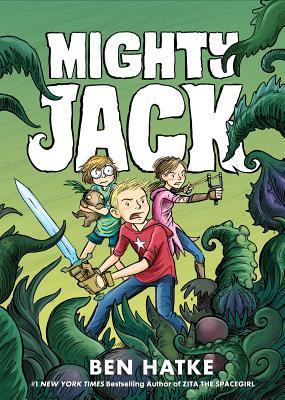 Book Description: Jack might be the only kid in the world who's dreading summer. But he's got a good reason: Summer is when his single mom takes a second job and leaves him at home to watch his autistic kid sister, Maddy. It's a lot of responsibility, and it's boring, too, because Maddy doesn't talk. Ever.

But then, one day, she does talk. Maddy tells Jack in no uncertain terms to trade their mom's car for a box of magic beans. It's the best mistake Jack has ever made. The little garden behind his house is about to become home to tiny onion babies running amok, dangerous biting cabbages, and, in a fiery cliff-hanger at the end of this first volume: a dragon.

I love retellings that take the flavor of an original tale but don't feel like they have to follow the script exactly. Ben Hatke's graphic novel Mighty Jack - a Jack and the Beanstalk retelling - does just that in a way that makes the story feel fresh and modern. This book doesn't have any cows that get sold, but Jack does exchange the keys to his mom's car for a box of plant seeds - yes you still want to hit him over the head for that. To be fair, he was encouraged to buy them by his sister, Maddy. Of course, because this book is set in the present (or at least within the last 20 years), exchanging a car without paperwork isn't exactly legal, and the vehicle gets reported as stolen and recovered later. Also, instead of a beanstalk, the seeds Jack plants create a magic garden, attract a dragon, as well as a fierce neighbor girl named Lilly. And a lot of trouble of course.

I like the way this tale mixes a story of a hurting family - a mother who works too much just to put food on the table, and two struggling kids left alone a lot of the summer - into one of magic and adventure. It grounds this story, adding an emotional connection to the characters. Jack is a kid who is trying his best, though he keeps getting into trouble anyway. I enjoyed seeing him begin to make friends with Lilly and gain confidence through the story. He doesn't always make the best decisions, but he has good intentions. I can't wait to find out what he - and Lilly and Maddy - get up to next. 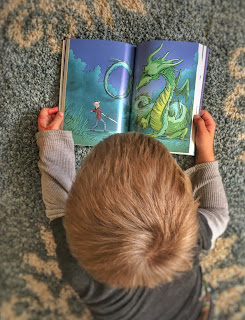 I read Mighty Jack with my 5 year old, and he loved it too. As soon as the book came in the mail he had claimed it for himself and was paging through it slowly. I did later read the story to him, but the art in this tale is very clear and easy to 'read' even without the words. When I asked him what he liked the best, he said 'everything,' and as soon as it was over, he asked 'where is book two?' This story ends on quite the cliffhanger, and we're both eager to find out what happens next. 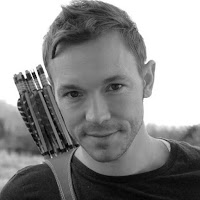 Ben Hatke is the author and illustrator of the New York Times-bestselling Zita the Spacegirl trilogy, the picture books Julia's House for Lost Creatures and Nobody Likes a Goblin, and the Eisner Award-winning graphic novel Little Robot. He lives and works in the Shenandoah Valley with his wife and their boisterous pack of daughters. His most recent book is Mighty Jack.

I have the worst time picking one of anything, so I'm going to highlight several. I also definitely suggest you go back through the posts in this tour to see what other titles bloggers have recommended.

Juliet Marlier is one of my favorite authors for fairy tale retellings. Daughter of the Forest - a retelling of the Wild Swans - is my most favorite of hers. But that's already been discussed on this tour. Thankfully, Marillier has many, and I also love her Beauty and the Best retelling Heart's Blood. It is another tale with a lush setting that is steeped in Irish history and magic. One of the best things about this adaptation is seeing 'Beauty' Caitrin come to love 'Beast' Anlaun, not in spite of who he is, but because of it. I love the way Marillier pairs characters who seem very unlikely at first glance but who make perfect sense on a deeper level. This is not a YA retelling, but  Hearts Blood has crossover appeal.

Another blogger on this tour has also mentioned Stacey Jay's Beauty and the Best retelling, Of Beast and Beauty, which is excellent. But I particularly loved her Princess of Thorns. Stacey Jay is another author who does a great job at taking a classic fairy tale and turing in into her own unique story. Princess of Thorns looks even less like the original fairy tale, featuring elements of both Sleeping Beauty and the Wild Swans. My favorite aspects of this tale were the main characters Aurora and Niklaas, their relationship with each other, and seeing how they grew throughout the book.

Recently, I also read Vassa in the Night by Sarah Porter, a vivid modern take on the Baba Yaga fairy tale that comes out of Slavic folklore. This gorgeous book is filled with quirky characters and a heroine you'll want to succeed. It is a retelling I didn't know a lot about previously, and I loved getting to know a new (to me) fairy tale tradition.

My 5 year old loves the Seriously Silly Stories collection by Laurence Anholt. These fractured fairy tales are all hilariously ridiculous. His most favorite (so far) is Snow White and the Seven Aliens, and of course there's also a Jack retelling that we've enjoyed too: Foolish Jack and The Bean Stack.