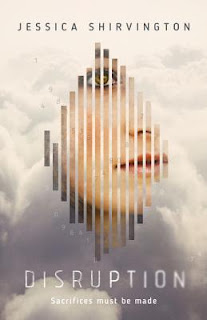 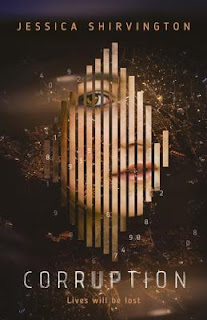 Yesterday, I talked about how much I enjoyed Disruption, the first in an addicting new duet by Jessica Shirvington. I haven't read the sequel Corruption yet but I'm already excited about the darker tone from the cover alone.

Today, I'm thrilled to be talking with Jessica Shirvington.

QUESTION: Whether they're already excited to read the book or are just hearing about it for the first time, what's one thing you'd like people to know Disruption?

JESSICA SHIRVINGTON: Maggie is tough and unapologetic and she is single minded in all of her decisions. The world has evolved and so has our technology and love of apps. Now – thanks to the fact we are all microchipped – instead of having apps for everything external we have apps for everything internal. Including an app that can be used to rate any person we cross paths with. They can be a friendship match, lust match, long term relationship or true match. And of course, there must be balance so there are those who rate as negatives with everyone. These people are being locked up in a massive underground facility – and one of them is Maggie’s father.

Q: How did the idea for the story in Disruption begin? Did it start with a moment?

JS: I was walking through a busy city square with a friend and I we were laughing hysterically as she told me tales of her internet dating disasters. I’ve been married for… well forever, so I have never had to deal with ‘internet’ dating. Anyway, we were surrounded by all of these people walking through the city square and of course, they all had their heads down looking at their smartphones. I remember saying to my friend: ‘Imagine if you could just walk past someone and get a rating and know if they were compatible with you. You could just get a text message or something. It could say: STOP WALKING! True match to your left!’

Naturally, this only made us laugh more. But that night, I couldn’t stop thinking about the idea of technology advancing in that direction. I was fascinated by the idea of being able to rate people and use technology to decide whether we should interact in the first place.

Q: Did the characters or setting come first?

JS: The characters came first. Actually, I planned on writing a compilation of stories – about several characters and how this new technology affected their lives all in different ways. There was so much potential content to work with but…once I discovered Maggie I knew her story was special. And her character wasn’t willing to share with everyone else!

The setting came later, as my real research began. I wanted to find a specific kind of secret destination which was shroud in mystery. Mount Weather in Bluemont, Virginia was perfect.

Q: Did you always know where you’d end the first book? Please tell us about your writing process!

JS: Yes. The ending was always clear for the first book. The process is different for every book but I generally like to write the opening chapter straight away, to find the character’s voice. Sometimes this will flow on and become three or four chapters and then I stop and write chapter breakdowns (I do these in pen in a notepad which I then carry around with me like a bible!). From there, my research layers on top in scribbled notes, photocopies and print outs etc and I stick it all in the notebook too. For every destination that I write about I also ensure I physically go there. Then I start to write. I write from the beginning to the end and I try not to stop or go back until I make it all the way to the last word. Then I start again, from the beginning, adding all the changes I thought of during the first draft. Rinse and repeat and ta-da! Manuscript finished!

Q: What’s one quality that Maggie brings out of Quentin, and vice versa?

JS: Maggie definitely forces Quentin to face a lot of truths and that then forces him to make a choice about the type of person he wants to be. Likewise, Quentin stands up to Maggie and looks beyond her mission and finds the true girl within. He lets her be her and for Maggie, that is massive.

Q: Science has never been my best subject, but I found the idea of the M-band and how it rates pheromones to be fascinating – and terrifying. Is that an idea that came out of research? Do you believe people have perfect matches out there?

JS: Absolutely. The research was fundamental to the premise. Microchips are already in all of our pets and they have developed microchips for humans that are already in use in some countries. The idea of linking the microchips to pheromones was fiction at work, but at the same time, it didn’t feel like a crazy leap.

In my research I came across a paper on pesticides. Insects use their pheromones to mate and reproduce. So when pesticides are developed for use on crops, instead of just killing the insects the chemicals alter the insects’ pheromone signatures, causing them to repel one another and therefore stop the mating process altogether. This process is called DISRUPTION. ;-)

Q: If Maggie and Quentin went to a job interview and were asked the classic “name one of your strengths and one of your weaknesses” question, how would they answer for themselves? Would that answer change between the beginning and end of Disruption?

JS: Maggie would say her strength is that she will always find a way to get the job done, no matter how underhanded she had to be. It would also be her weakness and she would acknowledge that.

Quentin would say his strength is in his morality and loyalty. His weakness would be that he has never had to work for anything.

Yes, their answers would probably change by the end, but that is up to the reader as well.

Q: For those of us (desperately) waiting for Corruption, can you give us any hints at what to expect in the sequel?

JS: In Corruption, Maggie’s eyes have been opened in a big way, as have Quentin’s. They need to dig deep and decide who they want to be and also, if that answer includes being in one another’s lives. For both of them, they really come into their own and that makes for some pretty interesting outcomes.

Of course I'm even more desperate to read the sequel now. Thanks so much for stopping by and answering my questions! 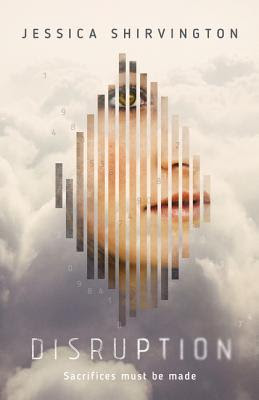 Book Description: The heart-stopping first chapter in bestselling author Jessica Shirvington's Disruption series.What if a microchip could identify your perfect match? What if it could be used against you and the ones you love? Eight years ago, Mercer Corporation's M-Bands became mandatory. An evolution of the smartphone, the bracelets promised an easier life. Instead, they have come to control it.Two years ago, Maggie Stevens watched helplessly as one of the people she loved most was taken from her, shattering her world as she knew it. Now, Maggie is ready. And Quentin Mercer - heir to the M-Corp empire - has become key to Maggie's plan.But as the pieces of her dangerous design fall into place, could Quentin's involvement destroy everything she's fought for? In a world full of broken promises, the ones Maggie must keep could be the most heartbreaking.

Read my five thoughts about this book, HERE. 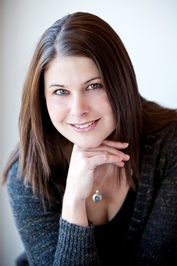 Jessica Shirvington is the author of THE VIOLET EDEN CHAPTERS also known as THE EMBRACE SERIES, stand alone novel, BETWEEN THE LIVES and the DISRUPTION duology.An entrepreneur, author, and mother living in Sydney, Australia, Jessica is also a 2011 & 2012 finalist for Cosmopolitan’s annual Fun, Fearless Female Award. She’s also one of the lucky few who met the love of her life at age seventeen: Matt Shirvington, a former Olympian and current sports broadcaster for Foxtel and Fox Sports. Married for twleve years with two beautiful daughters, Sienna and Winter, Jessica knows her early age romance and its longevity has definitely contributed to how she tackles relationships in her YA novels.
Find Jessica Shirvington: Website | Twitter | Goodreads