The Diabolic by SJ Kincaid 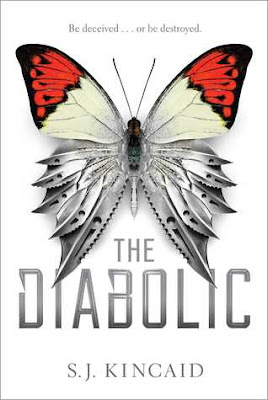 The Diabolic
by SJ Kincaid

Book Description: A Diabolic is ruthless. A Diabolic is powerful. A Diabolic has a single task: Kill in order to protect the person you’ve been created for.
Nemesis is a Diabolic, a humanoid teenager created to protect a galactic senator’s daughter, Sidonia. The two have grown up side by side, but are in no way sisters. Nemesis is expected to give her life for Sidonia, and she would do so gladly. She would also take as many lives as necessary to keep Sidonia safe.
When the power-mad Emperor learns Sidonia’s father is participating in a rebellion, he summons Sidonia to the Galactic court. She is to serve as a hostage. Now, there is only one way for Nemesis to protect Sidonia. She must become her. Nemesis travels to the court disguised as Sidonia—a killing machine masquerading in a world of corrupt politicians and two-faced senators’ children. It’s a nest of vipers with threats on every side, but Nemesis must keep her true abilities a secret or risk everything.
As the Empire begins to fracture and rebellion looms closer, Nemesis learns there is something more to her than just deadly force. She finds a humanity truer than what she encounters from most humans. Amidst all the danger, action, and intrigue, her humanity just might be the thing that saves her life—and the empire.
__________________________________________________________________________


At first The Diabolic seems like a typical dystopian - where the kick butt heroine inhabits a Roman Empire influenced space setting. And the book is those things, but it is also something different than that in a way that is intense and riveting. Maybe it was the way the author pushed the scheming and twists and everything else. Maybe it's the fact that this book is a standalone. But I was hooked from the start, and the story just got more and more exciting the crazier everything became.

As the description says above, "Nemesis is a Diabolic, a humanoid teenager created to protect a galactic senator’s daughter, Sidonia." Nemesis would die for Sidonia or kill for her. It is not wrong to say that Nemesis would do literally anything to keep Sidonia safe. And in this book, that means posing as Sidonia and going to the galactic court as the Emperor's hostage.

Honestly the number one thing I was worried about was the word 'humanoid'. I got confused and thought that meant machine like an android. And though, at first, Nemesis would probably have seen herself as like a machine - created for a purpose - she is much more than that. More like a super human with manipulated DNA. This became one of my favorite aspects of the book - seeing Nemesis grapple with her humanity and come to terms with what she is and who she wants to be.

This book has a romance. And it is another favorite part. Tyrus and Nemesis are perfect for each other. They both have sharp edges and have had to learn to adapt to survive. That is why they are a great match, but it makes some things harder for them too. Will their ambitions and loyalties be too much of an obstacle for them to overcome? I was fascinated watching that all play out.

The Diabolic has a lot of dystopian elements I've seen before. But the way they've been put together, and the way the author pushes her characters and their choices - I mean she goes for it - made the story feel fresh and exciting. This book was sold as a standalone, and unless something changes the ending is strong and solid. Although it is positive it is also unsettling in a way that had a powerful impact on me. I'm still thinking about it, and I read this several months ago.