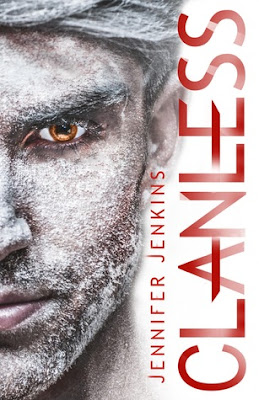 Book Description: Striker Gryphon has lost his position of honor among the Ram, and is now a hunted man. A traitor. Zo, the object of his affection, was murdered by members of his former clan. To honor her memory, he journeys to the highly secretive Raven “Nest” to warn strangers of their impending demise—though it could cost him more than just his pride.He doesn’t know that Zo is very much alive and in another part of the region assisting Nameless refugees over a mountain swarming with wild men known as “Clanless.” As each struggle to make sense of what their lives have become, they fight and claw to reach the Allied Camp, their last hope in bringing peace to the region. But the road back to one another is treacherous and uncertain. And freedom will come with a price.
_________________________________________________________________________

NOTE: Clanless is the second installment in Jennifer Jenkin's Nameless series. You can see my review for the first book, HERE. I've tried to make this review spoiler free for both books (definitely for the first).

Clanless begins just where Nameless ends, which is to say, we don't have to wait long to find out how the cliffhanger from the first book will play itself out. While Nameless took place almost exclusively behind the Ram's massive walls, in this installment, we get a closer look at the other clans in this world - especially the Raven and Kodiak, as well as the frightening Clanless who fall outside of those lines. This is a great sequel in terms of world building and expanding. I liked learning about the different clans, and despite the assertion that the Rams are the most brutal of all, the other three (and even those who claim no affiliation) have adapted in unique violent ways to survive.

Where the first book felt more like it was for Zo - she taking a great risk by entering an enemy clan where she expects almost certain death - in this one we get to see Gryphon step out away from his clan and into the world. Although their narration is pretty equal in this story, I think this installment was more for Gryphon, as he gets a look at the broader world, outside of the controlled viewpoint of the Ram, and comes to terms with who he will be going forward.

Despite the fact that this story begins on a cliffhanger, it took me some time to get back into the world - for me, this is where reading books far apart can affect my momentum. But the story did pick up for me. However, one of my major issues with this book - and middle books in general - is the amount of angst in this story. Gabe causes a lot of it, and I did not appreciate his role in this story. (spoiler)Gryphon and Zo each think the other is dead for a lot of the story. Not only are the separated, but they're both unnecessarily mourning the other. (end spoiler). This is also a traveling story, where the characters work to get from one location to another, and some of that felt a little bit like wandering around in the wilderness to me. I breathed a huge sigh when they finally got to their destination (at the very end).

Although Gryphon and Zo come from completely different clans and spend most of this book apart, it is clear how strong their connection is to each other. It takes Zo a little bit longer than Gryphon to realize this truth, but I enjoyed seeing how much they've changed the other, and how attached they've become. Besides our two main narrators, my favorite characters are the children. Zo's sister Tess is more of a part of this story, and I love Joshua, Gryphon's young charge, who is forced to grow up even more in this book. Gryphon also befriends a young Raven in this installment. He is wise beyond his years, and I can't wait for more of him in the finale.

Despite some issues - and worry about further angst, I'm eager for the third book. I can't wait for all the characters Gryphon and Zo have encountered to finally meet each other, and especially for everyone to meet Commander Laden. If you've started this series, don't miss the second installment! If you have yet to begin these books, the first two books would be great read back to back.

Love Triangle Factor: None  - Though the author does try to add some Gabe related angst, Zo does asset at the end that she just sees him as a brother.
Cliffhanger Scale: Low - definitely not the end of the series, but a much more bearable ending than the last installment)