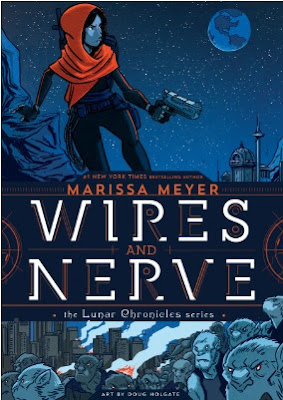 I love the Lunar Chronicles, especially the characters we've followed through four books, Cinder, Scarlet, Cress, & Winter, plus several novellas. (If you've not yet invested, it's time to do that! My most favorite is Scarlet.) This series is one of my favorite fairytale retellings, and YA sci-fi/fantasy series in general. Although the hype sort of ate at me on the last book, I still loved it. But I wasn't so sure about the news of Iko getting her own graphic novel series. For one, sometimes it's time to let a series go, and endless books set there just messes everything up. So I was worried about that. And second, I must admit to having a bit of android prejudice, not unlike Kinney's. I love Iko. She's definitely a bright spot in the series - fierce, loyal as well as amusing. Not a combo that everyone can manage. But she is a machine and I don't really understand how she can emote like a human, and possibly have a romance.

HOWEVER this book shattered all my fears to pieces. I've fallen hard for Iko. She is a great heroine. I'm loving seeing her in the spotlight a little more, and it's clear there's more to her background than we realize. I'm still not 100% sold on her having a romance, but the idea is growing on me. And I like Kinney a lot. No matter where their relationship goes, I love their banter with each other. They have great tension. I also love how much Iko cares about Cinder and the rest of their group - and how much they care for her. I was surprised and excited at how much we get to catch up with everyone ( and wonder of wonders, after reading this, I don't unship Thorne and Cress so much anymore - he's growing on me!).

I don't read a lot of graphic novels, but after reading Wires and Nerve, I think a graphic novel series is the perfect way to continue stories in this world. This different - more visual - format feels more fresh and exciting. It adds to the story, without feeling like it's watering down the original series. Plus I like getting visuals of all the Lunar Chronicles characters, and seeing the places they live and visit. Also, I'm actually really enjoying finding out more about what is happening as this word tries to reform and rebuild after Levana's downfall. The thing with these epic series is that usually they end on the high of victory, but there's always a lot of messy rebuilding to do after a huge world-changing battle. Especially one that takes place over two planets - Earth and Luna.

This Volume 1 does a lot of set-up, summarizing the last four books and major characters in a visual and brief way. Don't worry about tons of info dump! It was all happy and nostalgic revisiting and not long. Because of the recap, you could probably start with this and skip the last four books, but you'd miss so much goodness, so why would you?! In Wires and Nerve, we also get a look at how the characters are doing after the end of Winter - and before the Stars Above epilogue. As for the the major action: Iko is traveling around the world finding and capturing the rogue hybrid-wolf packs that have been left on earth, and of course things become much more complicated than she anticipates. This story definitely teases a lot more to come on that front, and has me eager for the next installment. As it's a graphic novel, this is a quick read. I think Wires and Nerve is only supposed to be a two volume series, but I would welcome a lot more stories following Iko in this world.

Highly recommended. If you're a fan of The Lunar Chronicles, this is a must read!

Love Triangle Factor: None (for the whole series!)
Cliffhanger Scale: Medium - stops sort of abruptly in the middle of the story. Lots of things left unresolved. But characters have specific plans going forward. Nothing immediately stressful, but I can't wait for more!