I'm thrilled to be a part of the Knife's Edge blog tour. This is the second in a duet that began with Compass South, and I had so much fun reading both books back to back. 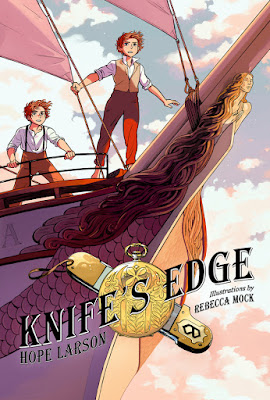 Book Description: Twelve-year-old twin adventurers Cleopatra and Alexandra Dodge are reunited with their father and realize that two family heirlooms reveal the location of a treasure that is their birthright. When they set sail with Captain Tarboro on the Almira, they know they’re heading into danger—the ocean is filled with new and old enemies, including their nemesis, the infamous pirate Felix Worley. But like a coral reef that lurks below the surface of the waves, trouble is brewing between the siblings. Alex is determined to become a sailor and is happy with his role aboard the Almira, but Cleo—the only girl on the ship—is tired of washing dishes in the galley. In an effort to find her own purpose, she begins studying sword fighting with Tarboro, but neither Alex nor her father approves. Can the twins remain close as they pursue different goals and dreams, or will their growing differences tear the family apart before the treasure can be found? 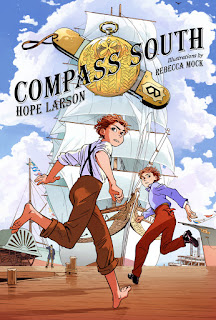 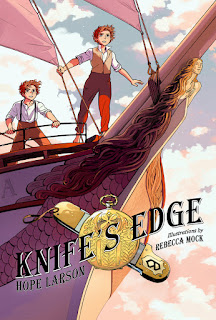 Set-up:
The Four Points duet is about twelve year old twins named Alexander and Cleopatra Dodge. In the first book, Cleo and Alex are living in New York in 1860 and trying to survive in the wake of their father's disappearance. After getting into trouble because of their involvement in the Black Hook Gang, they embark on a journey with the ultimate goal of reaching San Francisco. In the second installment the twins head back out to sea to find a lost treasure, guided by family heirlooms and the crew of the ship Almira. Discovering friends and running from foes through both installments, Alex and Cleo encounter pirates, find things once lost, and learn more about themselves and their family.

My Thoughts on the Duet:
I read Compass South and Knife's Edge one right after the other, and had such a great time with this duet! I am not a big reader of graphic novels, but am slowly changing that about myself. I am such a streamline reader (focusing on one element) that stories combining pictures with words, always take me some time to get into. But once I do, I always love them, and this series was no exception. The pictures in these books are beautiful and expressive, capturing the movement and emotions of the characters so well. I loved seeing both the grittiness of ship life and the wonder of Alex and Cleo as they traveled from North to South America and across islands in the sea.

I love books about twins, and this series plays with that theme in some fun ways, including one of my favorites, hidden identities. But within the excitement of following Cleo and Alex on their adventures, we also see the difference between being a girl and being a boy in the nineteenth century. One of the most compelling underlying parts of this series is watching Cleo figure out who she wants to be in a world that is heavily dominated by men, and has very specific roles for women (that definitely don't involve wearing pants or sword fighting).

Both of these books are just so much fun. They feature lots of adventures, pirate ships and lost treasure. But under all of that intrigue are orphan twins who are trying to find out who they are and where they belong in the world, and anyone can relate to that. I definitely recommend these books!

Hope Larson adapted and illustrated A Wrinkle in Time: The Graphic Novel, for which she won an Eisner Award. She is also the author and illustrator of Salamander Dream, Gray Horses, Chiggers, and Mercury. She lives in Los Angeles. hopelarson.com

Rebecca Mock is an illustrator and comics artist. Her work has appeared  in various publications, including the New York Times and the New Yorker.  She is co-organizer of the Hana Doki Kira anthology. Compass South is  her first book. rebeccamock.com