The Evaporation of Sofi Snow by Mary Weber 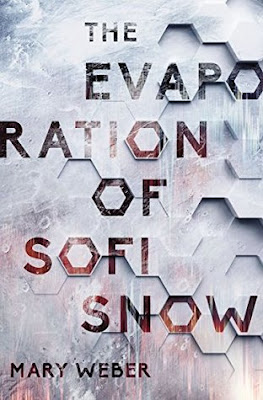 The Evaporation of Sofi Snow
by Mary Weber

Book Description: Ever since the Delonese ice-planet arrived eleven years ago, Sofi's dreams have been vivid. Alien. In a system where Earth's corporations rule in place of governments and the humanoid race orbiting the moon are allies, her only constant has been her younger brother, Shilo. As an online gamer, Sofi battles behind the scenes of Earth's Fantasy Fighting arena where Shilo is forced to compete in a mix of real and virtual blood sport. But when a bomb takes out a quarter of the arena, Sofi's the only one who believes Shilo survived. She has dreams of him. And she's convinced he's been taken to the ice-planet.Except no one but ambassadors are allowed there.For Miguel, Earth's charming young playboy, the games are of a different sort. As Ambassador to the Delonese, his career has been built on trading secrets and seduction. Until the Fantasy Fight's bomb goes off. Now the tables have turned and he's a target for blackmail. The game is simple: Help the blackmailers, or lose more than anyone can fathom, or Earth can afford.
____________________________________________________________________________

The Evaporation of Sofi Snow is a book of layers. On the surface this is a fast book set in a futuristic world ruled by corporations and filled with gamers, gadgets and aliens. The excitement and twists keep coming, and I couldn't stop reading once I started. But under the surface of this high action story are themes of loss and family bonds and identity, as well as what it means to be human, value life and have true relationships, all of which turn up the emotional intensity. I love stories that could be read on many levels and that are not just one thing, and this book features both of those elements. Amidst the rush of following Sofi on her quest to save her brother, each reader will be able to find something deeper for themselves these pages.

Three things you should know about The Evaporation of Sofi Snow before you start:

1) Eleven years ago another planet appeared in Earth's orbit. It's people are called the Delonese, and though they mostly look human, they are not exactly.
2) The most important person in Sofi's world is her brother Shilo. She will do anything to protect him.
3) Eighteen months ago, Sofi met a charming boy who stole her heart and then broke it. She's determined not to lose her heart to anyone again.

This book begins with Sofi, a brilliant gamer girl competing in the Fanfight Games - a mixted virtual and reality competition that the whole world tunes in to watch every 6 months. Sofi is the girl behind the screens while her brother Shilo is the one in front of the cameras and on the ground of the stadium, fighting to stay ahead of the other players also sponsored by corporations. But Shilo goes missing when the arena is bombed by another competitor, and though he's officially declared dead, Sofi is certain that he is not. Stopping at nothing to find him, Sofi soon realizes her only option is to convince Miguel, the young ambassador who broke her heart eighteen months ago, to take her to the Delonese ice-planet where she's sure Shilo is being held. Although this is not her favorite plan, Sofi will not let past feelings get in the way of her brother.

My favorite thing about this book is that many things are much more than they appear at first. Nothing is just what it seems on the surface, and that includes the characters. Who is Sofi under that confident armor she projects, and what losses have made her this way? Miguel projects a playboy persona, and it's true that he and Sofi share a complicated and painful past, but who is he really? In this story we get both of their POVs and slowly as the narrative unfolds, their layers are pealed back and exposed. Although the focus of this tale is Sofi's quest to find her brother, and within that herself, a lot of other elements are at play, including a second chance romance. It was hard for me to read about Miguel and Sofi's past, but also rewarding to watch them begin to face that and each other as they worked together. I'm definitely looking forward to more of them in the next installment.

The Evaporation of Sofi Snow ends in the middle of a high intensity moment, and I'm now dying for the next installment of this duet! 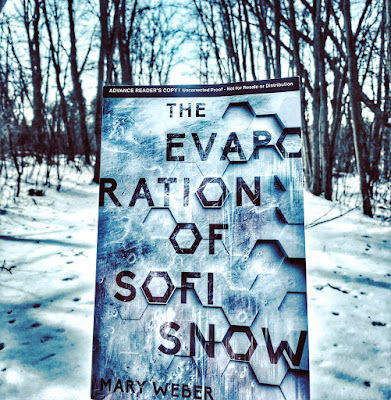 Photo from my instagram. Follow me @loveisnotatriangle
Posted by Lauren @ Love is not a triangle at 12:22 PM