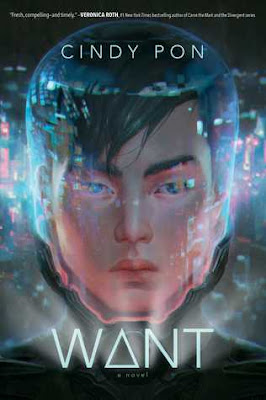 Book Description: From critically acclaimed author Cindy Pon comes an edge-of-your-seat sci-fi thriller, set in a near-future Taipei plagued by pollution, about a group of teens who risk everything to save their city.Jason Zhou survives in a divided society where the elite use their wealth to buy longer lives. The rich wear special suits, protecting them from the pollution and viruses that plague the city, while those without suffer illness and early deaths. Frustrated by his city’s corruption and still grieving the loss of his mother who died as a result of it, Zhou is determined to change things, no matter the cost.With the help of his friends, Zhou infiltrates the lives of the wealthy in hopes of destroying the international Jin Corporation from within. Jin Corp not only manufactures the special suits the rich rely on, but they may also be manufacturing the pollution that makes them necessary.Yet the deeper Zhou delves into this new world of excess and wealth, the more muddled his plans become. And against his better judgment, Zhou finds himself falling for Daiyu, the daughter of Jin Corp’s CEO. Can Zhou save his city without compromising who he is, or destroying his own heart?
___________________________________________________________________

Want is a riot of sensations. This book takes place in a future Taipei that is as bleak as it is richly drawn (that is to say very). Although I wouldn't want to live in this version of the world, I felt like I was experiencing Jason Zhou's home with all of my senses - from the brown smog skies (yuck) to the chaotic city life to the delicious food.

In Zhou's version of Taipei, pollution and industry are choking the environment all over the world, turning the blue skies to brown and leaving disease in its wake. While the poor are made to suffer in the polluted atmosphere, the rich wear special suits that regulate their airflow and protect them from the environment, further separating the haves, or you, from the have nots, or mei. Zhou's mother died as a result of exposure to the polluted air, and he, along with his friends, are determined to change their society, beginning with the disparity between the rich and poor.

Their goal is to take down Jin Corporation, the maker of the protective suits that the wealthy wear, because it's pretty clear to Zhou and his friends that Jin Corp is also spreading the disease that makes the suits necessary. Their plan involves Zhou getting close to Jin's daughter Daiyu, which gets complicated, because Daiyu isn't exactly what he expected, in fact he might actually like her.

I loved the characters in this story. Zhou is the narrator and has a close group of friends, all of whom are working together for this mission. I love a good squad story! Zhou also gets to know Daiyu the daughter of Jin Corp and, like him, I ended up liking her better than I thought I would. Of course there's a bit of a romance too. This story begins and ends with action - a kidnapping that sets the course of the book and then an intense rush of an ending where the characters' plans are carried out. But I also enjoyed the middle of the book, where Zhou must infiltrate the you society, and gets a look at his world from another angle.

Conclusion: Want has an amazingly strong sense of place with its setting in future Taipei, and I had a great time following Zhou and friends as they fought to take down Jin Corp.  This book is also a chilling reminder of what can happen if we're not careful with our environment, and it made me want to get out into nature and breath some clean air. I definitely recommend this book!
Love Triangle Factor: NoneCliffhanger Scale: Low. Ends in a solid place, but with more story that could be explored, and a sequel called Ruse has just been announced. 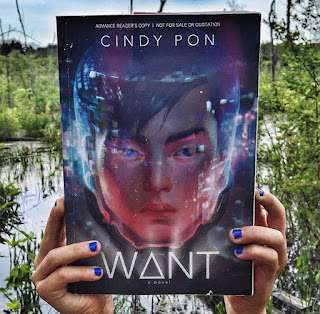 I took Jason Zhou on a bike ride.
I thought he'd appreciate some blue skies and fresh air.
Follow my bookish Instagram @loveisnotatriangle
Posted by Lauren @ Love is not a triangle at 10:36 AM