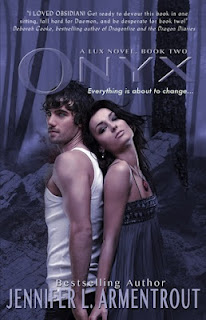 Being connected to Daemon Black sucks…Thanks to his alien mojo, Daemon’s determined to prove what he feels for me is more than a product of our bizarro connection. So I’ve sworn him off, even though he’s running more hot than cold these days. But we’ve got bigger problems.

Something worse than the Arum has come to town…The Department of Defense are here. If they ever find out what Daemon can do and that we're linked, I’m a goner. So is he. And there's this new boy in school who’s got a secret of his own. He knows what’s happened to me and he can help, but to do so, I have to lie to Daemon and stay away from him. Like that's possible. Against all common sense, I'm falling for Daemon. Hard.

But then everything changes…I’ve seen someone who shouldn’t be alive. And I have to tell Daemon, even though I know he’s never going to stop searching until he gets the truth. What happened to his brother? Who betrayed him? And what does the DOD want from them—from me?
No one is who they seem. And not everyone will survive the lies…

Onyx is the second book in a series. My review may contain spoilers for Obsidian.

Okay guys, please don't send me hate mail, but I'm going to be the lone dissenter in the crowd of glowing reviews of this book. It's not that I didn't like Onyx, I just didn't LOVE it as much as Obsidian. The main reason for my difficulty with this story was Katy's behavior. When we met her in the first book, I loved that she was stubborn, independent and called Daemon out on his erratic behavior towards her. But these same characteristics began to get on my nerves in book two. She just kept making the same argument and excuses to herself over and over again, refusing to listen to the truth, which in turn impaired her good judgement. I seriously wanted to shake Katy a few times while reading this one.

Katy kept worrying that Daemon only cared for her because they were connected, so she didn't want to get involved with him. I understood that argument at first. It wasn't THAT she had these feeling that bothered me. It's the fact that she couldn't get beyond them.  As a reader it was clear to me that Daemon DID care for her. And I think even Katy believed that eventually, though she refused to acknowledge it to herself. Thus it was hard for me to stand behind her argument for staying away from him (again and again). Also, even with Katy's reservations about Daemon's feelings, she continued to make out with him regularly. So actually she really was't doing a good job at resisting him at all.

It got even more confusing with the introduction of Blake. At one point Katy was essentially "dating" both of them at the same time (regardless of what she told herself), and that never sits well with me. In the end though, Blake turned out to be an interesting addition to the storyline.

Daemon was surprisingly patient throughout this book. Maybe it was his arrogance coming through. But I still felt bad for him, because Katy's behavior became a tad ridiculous and confusing. Daemon wasn't perfect, however, and did have to work through some protective tendencies that he had toward Katy. But I understood where he was coming from (with his history and what happened to Dawson). To me, the personal issues he needed to deal with made sense for his character.

Despite my reservations, Katy and Daemon have amazing chemistry, and I continue to be in awe of Jennifer Armentrout's ability to create tension between her characters. I also love watching Katy and Daemon work together as a team. It is clear that they are good for each other, but there is also a fragility to their relationship because of the huge outside forces converging on them. In the end, K+D do make progress individually and as a couple. I just hope it sticks and we can go forward from here. Because there are lots of outside issues that are bigger than themselves, which could tear them apart.

Although the beginning of the story focused largely on Katy and Daemon's relationship issues, Onyx also has action, lots of revelations (some surprising, some predictable) and continues to develop the complexity - and danger level - of the world in which they live. We find out more about the aliens and the government that's attempting to control them. The end is exciting and a great set up for book 3. I'm looking forward to finding out what happens in Opal!

Rating: 3 stars
Love Triangle Factor: In this book, possibly a Medium. In the series - Mild.