The Summer of No Regrets 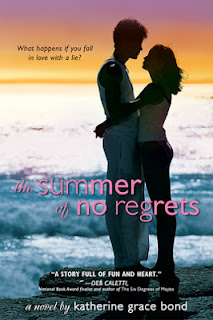 This was the summer that would change my life.
No more being what everyone expected. No more doing what everyone else wanted.
So when Luke came into my life, I decided to keep him a secret. Maybe he as a dead-ringer for notorious Hollywood bad boy Trent Yves. And it was possible that everything he told me was a lie. And yes, I was probably asking for trouble. But all I saw was Luke--sweet, funny, caring--someone who would let me be the real me.
But which was the real him?

Brigitta lives with her hippie parents in the woods of the North West in a spiritual retreat center that caters to everyone from nuns to children with psychic abilities. The Center, or Earthship, is made out of materials such as tires and soda cans. Brigitta is surrounded by people of varying faiths and belief systems. Her grandparents were Christians, her mom believes in fairies, her father is a former atheist turned shaman, and her sister Mallory has put her hopes in psychology. Not surprisingly, Brigitta’s not sure what to believe. She’s also still dealing with grief from the death of her grandparents – Nonni and Opa – that she doesn’t know how to handle.

While in town one day with her celebrity obsessed friend Natalie, Brigitta literally runs into a boy named Luke. Her friend immediately suspects he is the actor Trent Yves. Brigitta rolls her eyes at this, but secretly also thinks he looks a lot like Trent.

It turns out that Luke has moved into the mansion next door, and Brigitta starts to get to know him with him after they share an encounter with a cougar. The problem is that Luke keeps disappearing for days on end, with no explanation. And he still looks suspiciously like Trent. But Trent the celebrity is a jerk and Luke seems like a really great guy. So who is he? And where does he go when he disappears?

The cast of characters in The Summer of No Regrets are quite eclectic. And with so many different messages coming at her, I can definitely understand why Brigitta is trying to figure out who she is and what she believes. She also wants other people to know the real her. I really enjoyed these coming of age themes. It also makes Brigitta's relationship with Luke all the more interesting, because as she begins to feel like he knows and gets her – she starts to more fully question whether she knows him at all.

Amidst Brigitta's quest to figure out who Luke is, silly blog posts and some cute baby animals too, this story asks some really great life questions that many teens (and adults) ask themselves.
This story isn't always realistic, and I think its scope may have been a tad large (a bit ambitious in the number of questions it asks). Also, Brigitta "could" have figured out who Luke was earlier in the book - but perhaps she didn't want to know. Because it might have changed everything - I get that fear.

DISCUSSION QUESTION:
There's a scene in the book during the time that Brigitta doesn't know whether Luke is Trent or not, when she has access to his wallet. She has to decide whether to look and see for herself who he is, or trust that he's telling her the truth. What do you think you'd do in the same situation?