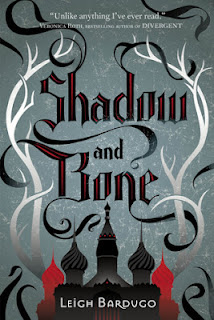 Alina Starkov doesn’t expect much from life. Orphaned by the Border Wars, the one thing she could rely on was her best friend and fellow refugee, Mal. And lately not even that seems certain. Drafted into the army of their war-torn homeland, they’re sent on a dangerous mission into the Fold, a swath of unnatural darkness crawling with monsters who feast on human flesh.When their convoy is attacked, all seems lost until Alina reveals a dormant power that not even she knew existed. Ripped from everything she knows, she is whisked away to the royal court to be trained as a member of the Grisha, the magical elite led by the mysterious Darkling. He believes she is the answer the people have been waiting for: the one person with the power to destroy the Fold.

Swept up in a world of luxury and illusion, envied as the Darkling’s favorite, Alina struggles to fit into her new life without Mal by her side. But as the threat to the kingdom mounts, Alina uncovers a secret that sets her on a collision course with the most powerful forces in the kingdom. Now only her past can save her . . . and only she can save the future.

In some ways the plot and characters in Shadow and Bone are very conventional within young adult fiction. There’s a plain girl who feels like she doesn't fit into her world. She has a best friend who is a boy. She realizes that she has a unique magical talent much later than she should have figured it out. She goes to a boarding school where there are mean girls, gossip and makeovers. She meets a mysterious hot guy. Throughout the course of the novel she struggles, but finds confidence and grows as a person.

What I really love about this book is that it completely surprised me. I’m not going to say anything more specific about this, because I want you to be surprised as well.

The cast
The Villain: It took me a long time to figure out who the antagonist in the story was.
The Narrator: Alina Starkov. I didn’t dislike her, though I didn’t feel that there was that much that was remarkable about her (she is different from the other girls in the book, but in a way that is similar to a lot of other YA heroines). But I did enjoy seeing her struggle, own up to her mistakes, and find her own strength and will. And she did have some good moments.
The Best Friend: I disliked Mal in the beginning of the story, because he took Alina for granted. But I also saw him as the conventional/obvious choice for Alina, and I wanted something different for her.
The Darkling: Oh I LOVED him. He was by far my favorite character. It is worth reading this book just to experience him.
The Apparat (priest): With his scraggly beard, yellow teeth and the way he followed and watched Alina, he was one creepy guy.

The Romance: There is a bit of a love triangle in this story. (And I still liked this book! WHAT???)

I LOVED the third person narrative in the prologue of Shadow and Bone. It really did a great job at setting mysterious atmosphere of the story. This book feels both high fantasy and historical - it has it's own map and made up landscape and cities. Also, the society is uniquely structured to accommodate the magical elements in the world. But it features a Russian inspired setting and culture (which I really liked!). And there are references to societies of people that seem to mirror other world cultures, as well as to the world being on the verge of modern times.

I can't wait to get my hands on book 2 and see what happens next.