One of my favorite things about reading a book is being able to discuss it with others. Especially if it is a story that I love. For books that I can't hold myself back from talking about in detail, I'm going to start doing separate Discussion Posts from my reviews.

NOTE: I cannot stress enough that this post will be very VERY SPOILERY. Please do not read below the book cover if you haven't read The Scorpio Races. 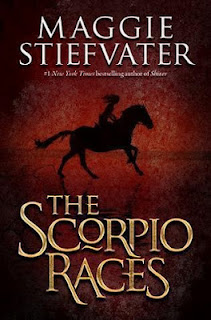 Question: Do Sean and Puck get what they need?

When Sean is at the Scorpio Festival he has the following conversation with the mare goddess (Found on pgs 180-181):


"Sean Kendrick," she says, and the voice is throaty, barely human. I hear the sea in it. "Did you get your wish?"
I cannot look away. "Yes. Many times over."
The voice again takes me by surprise. "Has it brought you happiness?"
The question is not one that I would normally consider. I'm not unhappy. Happiness isn't something this island yields easily; the ground is too rocky and the sun too parse for it to flourish. "Well enough."
Her fingers are tight, tight, tight on my jaw. I smell blood and I see, now, that fresh blood, soaked into the shirt, has dripped onto her hands.
"The ocean knows your name, Sean Kendrick," she says. "Make another wish."
She reaches up and smears the back of her hand across both my cheekbones.
Then the mare goddess turns away to follow the drummers, jus a woman in a dead horse's head. But there is something hollow inside me, and for the first time, winning doesn't' feel like enough.

Later on in the book Sean and Puck have a conversation on the rocks after Tommy Falk's funeral (this is one of my FAVORITE scenes in of book). It is there that Sean finally makes his wish. "To get what I need" is what Sean whispers to the sea.

But do he and Puck get there wishes in the end?

In many ways the ending of The Scorpio Races leaves a quiet ache inside. It’s bittersweet. Happy but also melancholy, with Sean’s fall, Corr’s injury, Tommy Falk’s death and Gabe’s leaving the island. But Sean wanted to know that Corr loved him all along, and in the last scene of the book when the horse chooses Sean over the sea, I think Sean gets that. Sadly, it took an irreparable injury for it to happen.

Also, Sean and Puck couldn’t both win the race. If he’d just come in second, Malvern would never have sold Corr. But if he’d left Puck behind to fend for herself, he might have lost her. I don’t think he could have handled that – just as Puck says she could not bear it if Sean died. (And if they'd both made it to the finish line together, I have a feeling that he'd have let her win.)

In the end I think that Sean and Puck do get what they need, and I hope that they’re happy somewhere on that island in the ocean filled with subtle magic and horses from the sea.

Do you agree/disagree with me? How did you feel about the end?

1. Who was the mare goddess? Was it someone we met on the island?

2. What (if anything) was going on between Peg Gratton and Gabe? Maybe I read to much into their interactions but I kept thinking they were having an affair. Anyone else feel that way?