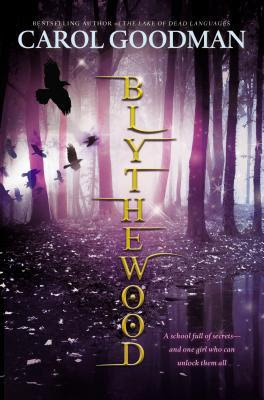 Welcome to Blythewood.
At seventeen, Avaline Hall has already buried her mother, survived a horrific factory fire, and escaped from an insane asylum. Now she’s on her way to Blythewood Academy, the elite boarding school in New York’s mist-shrouded Hudson Valley that her mother attended—and was expelled from. Though she’s afraid her high society classmates won’t accept a factory girl in their midst, Ava is desperate to unravel her family’s murky past, discover the identity of the father she’s never known, and perhaps finally understand her mother’s abrupt suicide. She’s also on the hunt for the identity of the mysterious boy who rescued her from the fire. And she suspects the answers she seeks lie at Blythewood.
But nothing could have prepared her for the dark secret of what Blythewood is, and what its students are being trained to do. Haunted by dreams of a winged boy and pursued by visions of a sinister man who breathes smoke, Ava isn’t sure if she’s losing her mind or getting closer to the truth. And the more rigorously Ava digs into the past, the more dangerous her present becomes.
Vivid and atmospheric, full of mystery and magic, this romantic page-turner by bestselling author Carol Goodman tells the story of a world on the brink of change and the girl who is the catalyst for it all.

Before I picked up Blythewood, I had been reading a book that takes place on a desert island, but it wasn't working for me at all. That hot sun and a horde of scantily clad teens just didn't jive with the end of October, week of Halloween feel I wanted. Then I read a review of Blythewood that Wendy Darling posted, and I remembered that I had the book from the library. I was planning on returning it unread, and I'm very thankful that I started reading it instead. It was exactly the story I wanted to read last week.

Set-up (adapted from Goodreads)
Avaline Hall is not having a good year. When Blythewood begins, she is a poor factory girl that has recently lost her mother. Things get steadily worse for Ava for a while - a tragic fire and a mental institution among other set backs - but then Ava meets her grandmother and learns more about her mother  and the girls' boarding school that her mom attended - and was expelled from. Now heading to Blythewood herself, Ava is not sure how her wealthy classmates will react to her lower class background. But Ava is determined to unravel the mysteries of her mother's past, the identity of her father, and find the boy who saved her from the factory fire. Ava hopes that the Blythewood School will give her the answers she seeks. She never guessed what she would actually find there.

Five reasons Blythewood was the perfect Fall read for me

1) Historical Fiction + Fantasy = Win - Blythewood takes place in 1911 and two well known historical events bookend the plot. I really like when an author adds a dose of of historical truth into a fantasy book. For some reason it grounds the story into reality and makes it seem even more believable. The two tragic events included in Blythewood are particularly fascinating. I'm not going to tell you what they are, because I thought it was more fun - and horrifying -  to discover them for myself. The event in the beginning, especially added some darker undertones to the book and worked well to create an overall creepy atmosphere in the story.

2) Boarding School - There is an overabundance of boarding school plots out there, including ones featuring mean girls, secret passages and haunted woods. But despite all that, the Blythewood School is enchanting and surprising. Not everything is what it seems in this story, and I enjoyed discovering those moments for myself. On the surface, Blythewood is a wealthy girls' boarding school, but there's a lot more to the school and these girls than that. We meet a lot of colorful characters: students, teachers and other residents of the Blythewood neighborhood. I have a few favorites, and I'm hoping that we get to know them all more deeply in the future. One favorite thing about this school is the role that bells play in their history as well as purpose. It's not mythology that I've seen used a lot, but reading about bells used to fight demons in another recent book, I've been fascinated by its lore.

3) Atmosphere - The creepy atmosphere in this book is delicious: The moody boarding school with endless secrets. The time of year - fall descending into winter madness. An interplay of light and dark also underlies the plot of Blythewood, which gives the book a spooky feel. The balance between the two themes keeps the story from becoming too dark and heavy, but is also a debate within these characters that I foresee will carry throughout and direct the future of the series. In this book, I especially like that it is not immediately clear what the lighter and the darker sides are. Part of the charm of this story was unraveling that for myself. I've seen some complaints about the pacing of the story, but I thought the flow of this book added richness to this tale, and I enjoyed becoming deeply immersed in this world.

4) Romance - A slowly developing forbidden romance is one of my most favorites to read. From the beginning of Blythewood, every scene shared by Avaline and Him is charged with tension. The simplest gesture is shivery and meaningful, and I can't wait for more. I have high hopes for these two, especially in light of revelations we learn about Ava at the end of the book.

However, there is also another boy in this book, whom the author seems intent on reminding us about. While I like his character too, I never really felt much between him and Ava, and I'm hoping that his part in this story is going to be more important than only adding to an annoying triangle. The author gives hints to this fact, so I'm crossing my fingers. But as I said, there is a clear winner for me (and for Ava, I think).

5) Avaline Hall's path - Coming from a poor labor background, experiencing some truly strange and frightening phenomenon, before all of a sudden entering a school with girls at the top of the social ladder, Avaline struggles with her self worth, as well as where she fits in the world. Those thoughts got to be a bit much for me a few times, for the most part, I could sympathize with her perspective, and I grew to really care for her as this story progressed. I especially like the direction that Avaline's life takes towards the end of this book. I'm very interested to see how she handles certain revelations in the future.

Most of all, Blythewood made me eager to discuss the story with someone and desperate for the next book in the series. Please read this book so that we can talk about it!

Love Triangle Factor: Difficult to tell at this point, but I'm going to say somewhere between None and Mild, and I'm going to remain optimistic that it will stay that way.
Cliffhanger Scale: Low. This story wraps on an interesting revelation, but there is no immediate danger.