Crash Into You by Katie McGarry 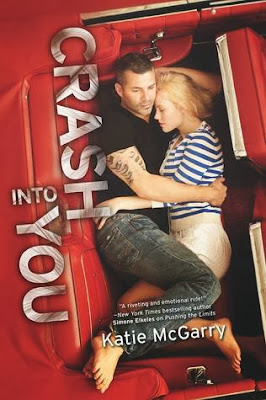 From acclaimed author Katie McGarry comes an explosive new tale of a good girl with a reckless streak, a street-smart guy with nothing to lose, and a romance forged in the fast lane
The girl with straight As, designer clothes and the perfect life-that's who people expect Rachel Young to be. So the private-school junior keeps secrets from her wealthy parents and overbearing brothers...and she's just added two more to the list. One involves racing strangers down dark country roads in her Mustang GT. The other? Seventeen-year-old Isaiah Walker-a guy she has no business even talking to. But when the foster kid with the tattoos and intense gray eyes comes to her rescue, she can't get him out of her mind.
Isaiah has secrets, too. About where he lives, and how he really feels about Rachel. The last thing he needs is to get tangled up with a rich girl who wants to slum it on the south side for kicks-no matter how angelic she might look.
But when their shared love of street racing puts both their lives in jeopardy, they have six weeks to come up with a way out. Six weeks to discover just how far they'll go to save each other.
_________________________________________________________________

Crash Into You is book 3 in Katie McGarry's Pushing the Limits series. After meeting Noah and his two best friends Beth and Isaiah in Pushing the Limits and watching Beth destroy Isaiah's heart in Dare You To, Isaiah finally gets his turn in the spotlight. As hesitant as I was when I first discovered that Beth was gong to end up with Ryan instead of Isaiah, I'm so happy that McGarry knew best, and introduced Rachel to Isaiah.

Rachel + Isaiah
In some ways, Rachel and Isaiah are exactly alike, and perfect for each other. They both love cars, drive Mustangs and enjoy speed and the open road. They both feel lonely and have complicated relationships with their families. But that's where the similarities end.

Rachel comes from money, goes to prep school and has a large family, including 4 older brothers. She is the youngest of the brood and is sheltered and overprotected. Both because she has suffered from debilitating panic attacks in the past (although she tries to hide it from her parents), and also because she is her parent's "replacement" daughter for her older sister Colleen who died of leukemia before Rachel was born. On the other hand Isaiah lives in a rat infested apartment with Noah, and the two of them can barely afford rent. Isaiah's mother has just gotten out of prison and wants to form some sort of a relationship with him. But Isaiah is hurt and angry about her behavior in the past and refuses to see her.  In the midst of this, Isaiah and Rachel meet at a drag race one night.


Three aspects of Crash Into You that surprised and delighted me.

1) Cars - I don't know anything about cars, but I love the drag racing, car loving part of this book. It was so much fun to learn about a very different American culture than the one in which I live. I got completely swept up in it along with Isaiah and Rachel. I adored this bond between them, and I swooned every time Isaiah called his Mustang a pony.

2) Romance - I really like how the romance in this book played out, especially the fact that it goes at the right pace for these characters. Rachel has never even kissed a boy when this story begins, and the way that her relationship develops with Isaiah is realistic. But it is also filled with heat and swoon. Rachel's inexperience with relationships is a part of her, but not the focus of the story or romance. What I mean is that I'm thankful that McGarry respected this part of Rachel, without it seeming like a problem that Isaiah needed to fix. Their relationship builds realistically for the both of them, and it was fun to watch them discover each other. Rachel doesn't change who she is when she meets the more experienced Isaiah. I was actually surprised, in a good way.

3) The end - I appreciate that McGarry doesn't magically fix all of these characters' problems by the end of the book. Isaiah is nearing 18 and about to age out of foster care. He's struggling to make money and keep his life on the path he wants. His mom has just come back in his life and he carries a lot of anger towards her. On the other hand, Rachel is the baby of the family, with 4 older brothers and parents who are way over protective. I'm glad that McGarry kept their situation realistic, but also hopeful. Looking back, she's done the same for Noah/Echo and Beth/Ryan. Although Beth has a rich uncle, Noah and Isaiah are still working hard to stay afloat, and it isn't always easy for people in their situations.

Related to this, I like the interplay on what it means to be strong and weak in this book, as well as the discussion on difference between protecting someone because you love them and loving them enough to let them make their own choices and failures. Despite the fact that she is small and suffers from panic attacks, Rachel is one powerful girl. I love the way that she retains that part of herself despite what she faces, and that she has to learn to believe in herself, and stand up for what she wants.

Two other details about this book I wanted to mention.

4) I wish we'd been given more background on Eric. Or, rather, with the major role that he played in the conflict of this story, I wanted a better understanding of how this skinny boy become a mob-boss like ruler in his area of the city. Although I will freely admit to having a very different background from Eric and even Isaiah and Rachel, it was hard for me to believe some of Eric's plotline at times. Especially, how he had that much power over Isaiah and Rachel. That said, this book has a lot going on in it, and Eric's role was my least favorite part. I wish we'd focused more on Rachel and Isaiah's family issues. Some of the many plot threads seemed a tad rushed to resolution near the end of the book. I just wanted more! (Yes, I get that this paragraph completely contradicts itself.)

5) Looking Ahead - Rachel has four single older brothers, and we already know that West is going to be the focus of the next book. Hopefully we'll also get a story for Rachel's twin Ethan after that, and maybe the older two as well. I got excited when we were introduced to these boys, and though I wasn't always the biggest fan of how they treated Rachel, i't was fun to get a picture of them in this book - both good and bad.

Conclusion
Crash Into You made me fall deeper in love with Isaiah. It was a treat to get to know him better in this story. To have the chance to understand how life has shaped him, and to be able to root for him as he found the girl and worked towards a future that he could be proud of. It took me a bit more time to warm up to Rachel, but I ended up thinking that she's perfect for Isaiah, and I especially like what McGarry does with her story arc. I wish them all the best, and hope that we'll get a few more pieces of their story as the series continues.

Love Triangle Factor: None
Cliffhanger Scale: Complete story, but part of an extended companion series. Rachel's brother West gets a book next, called Take Me On