Into the Still Blue by Veronica Rossi (spoiler free)

NOTE: I made every effort to make this review SPOILER FREE for the series, though I'd recommend skipping the summary to the right of the book cover if you are new to this trilogy. Find my review of book two, Through The Ever Night, HERE. 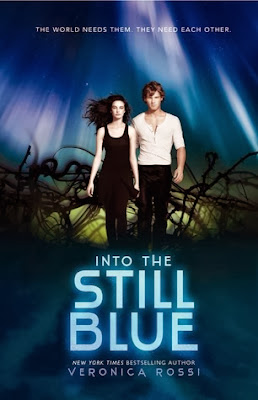 Official summary: The earth-shattering conclusion to Veronica Rossi's "masterpiece" Under the Never Sky trilogy and sequel to the New York Times bestselling Through the Ever Night (Examiner.com).
Their love and their leadership have been tested. Now it's time for Perry and Aria to unite the Dwellers and the Outsiders in one last desperate attempt to bring balance to their world.
The race to the Still Blue has reached a stalemate. Aria and Perry are determined to find this last safe-haven from the Aether storms before Sable and Hess do-and they are just as determined to stay together.
Meanwhile, time is running out to rescue Cinder, who was abducted by Hess and Sable for his unique abilities. And when Roar returns to camp, he is so furious with Perry that he won't even look at him, and Perry begins to feel like they have already lost.
Out of options, Perry and Aria assemble a team to mount an impossible rescue mission-because Cinder isn't just the key to unlocking the Still Blue and their only hope for survival, he's also their friend. And in a dying world, the bonds between people are what matter most.
In this final book in her stunning Under the Never Sky trilogy, Veronica Rossi raises the stakes to their absolute limit and brings her epic love story to an unforgettable close.
_________________________________________________________________________

After reading Under the Never Sky and its brilliant follow up Through The Ever Night, I have grown so attached to Aria, Perry and Roar and their entire world that by the time I reached Into the Still Blue, I've completely lost the ability to think critically about their story. I've fallen in love with them and consider them to be friends, so honestly, how can I judge anything about them or their journeys  Thus, I'm struggling to know exactly what to tell you about this book, because it seems like a disservice to them to start talking about things like plotting and pacing (not that I really do that anyway). I mean, Perry and Roar are real, right?

What I do want to tell you, is that if you enjoyed the first two books in this series, you're going to love Into the Still Blue as well. I've been wary of series conclusions lately, but this is not one that you should fear. Not only are our favorite characters back, but we also get answers to lingering questions.

This series features one of my favorite love stories. More than tender moments or hot kisses (although those are present and quite nice), we have seen a connection build and deepen between Perry and Aria over the course of the series. Their relationship has been tested, but their respect for each other and bond has grown steadily stronger without adding unnecessary drama or angst. Their relationship has made them each more confident as leaders and able to make tough choices, which they do to abundance in this story. Even when Perry and Aria are not together - or when they're disagreeing - they manage to remain in sync in a way that many couples can't manage on their best days.

In addition to romance, Rossi excels at creating one-on-one relationship bonds between many characters. The friendships between Perry & Roar and Aria & Roar are the most notable in this series, and both get some great page time in this story. But there are several others that stand out to me in this installment. Some that cropped up unexpectedly, some I was excited to see deepen and at least one broke my heart. I want to tell you about all of them, but most are spoilers. However, this has become one of my favorite aspects of this series and Into the Still Blue specifically.

The end of Perry, Aria and Roar's journey is not easy. This book nearly broke me in several places. Rossi does not hold back on what she puts these characters through, especially through the middle part of this book. There were several points where I was biting my nails and genuinely worried about whether key players would make it. Nothing is certain, lives are at stake, and an entire community of people is in danger of extinction unless they can make it to the Still Blue.

Some parts of this book were big and dramatic, some events seemed quieter than I thought they would, but I think that's what life is like for real, and I like this book more, because of that. Into the Still Blue, goes out on a quiet note, and though selfishly I wanted more and more, I closed this book with a satisfied smile.