NOTE: Erased is the second book in a series. This review may contain mild spoilers for the first book. Find my review of Altered, HERE. 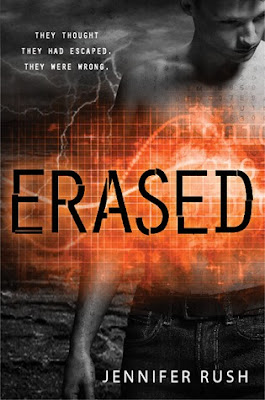 Official Summary: They thought they had escaped. They were wrong.
After fleeing the Branch with Sam, Cas, and Nick, Anna is trying to make sense of the memories resurfacing from her old life. At the same time, she's learning how to survive in hiding, following Sam's rules: Don't draw attention to yourself. Always carry a weapon. Know your surroundings. Watch your back.
Then a figure from Anna's childhood reappears. Is it a Branch setup, or could it be the reunion Anna has hoped for? Uncertain of where her loyalties lie, Anna must fight to learn the truth -- before she is betrayed again. Ultimately, the answers hinge on one question: What was the real reason her memories were erased?
Jennifer Rush delivers a thrilling sequel to Altered in a novel packed with mysteries, lies, and surprises that are sure to keep readers guessing until the last page is turned. (From Goodreads)

Erased kept me on the edge of my seat for most of the book. For that this story is a big win. This series continues to be fast paced and fun, while maintaining its kick butt cinematic feel. Jennifer Rush is not afraid to push her characters into situations where they have to make very quick and difficult decisions. We saw some of that in Altered, and even more in Erased. When this book starts, Anna, Sam, Cas and Nick are on the run from The Branch and that means always being alert to their surroundings. I love all the details of the life of these characters while they're on the run. Traveling in pairs, never taking the same route, staying anoymous, monitoring their surroundings at all times. I could literally feel the constant state of suspended tension they were in. And then all of a sudden something happens and BOOM the story takes off at a rapid pace and is at full throttle for the rest of the story.

Erased, like Altered is focused more on action than character development. Although the action is pretty addicting, I wish that had been a little more balanced out with a focus on how Anna, Sam, Nick and Cas dealing with everything they've faced. On top of being constantly on alert and on the run these four still dealing with large blanks about their past. The dynamic of their missing pasts, coupled with everything they've faced is very intriguing, and though I enjoyed this book, I think it could have been stronger if both were explored in depth. Especially considering some of the intense situations that they are forced to navigate in Erased.

In this book we do get several pieces from Anna's past that shake things up for her, and through that we get a better sense of her character. Of course all of this information also added to the drama of the story. The prediction I made at the end of Altered about what would happen in this book was exactly right. But things didn't play out exactly as I expected them to occur, which was a very pleasant surprise.

Besides Anna, the character we saw the most growth from in Erased, is Nick. We discovered a few secrets from his past as well, and I loved finding out more about him and how he fit into the group dynamic. Though he's also integral to this plot, I really wish that we'd gotten more depth to Sam. He's so guarded and closed off all the time, that it was so hard to feel emotionally attached to him. Anna actually has a conversation with someone in Erased about how guarded Sam is, and I'm thinking his personality is not going to change at this point.

My major trouble with Erased had to do with my frustration with Anna. She was a step behind me in figuring out several important details, and she made some seriously idiotic decisions because of it. One in particular just seemed way out of character for her. It was such a bad decision that was cringing and yelling NO! It also seriously affected how I saw her after. However, she also never gave up fighting for those she loved, and because of that, redeems herself pretty well.

I believe Erased concludes Anna's narration and the third book will be a companion focusing on Nick. This makes me very happy. I'm excited to find out more about him, especially in light of what we discover in this story. Maybe we'll also get books focusing on Cas and Trev.

About the cover: As silly as the half naked boy cover may have been, this one just makes it looks like he's being purposefully blurred out. I actually prefer the original with the vertical writing. Either that or they need new models wearing shirts.