World After by Susan Ee

NOTE: World After is the very much anticipated sequel to Angelfall. My review may contain some spoilers for the first book. If you've yet to read it, what are you waiting for? 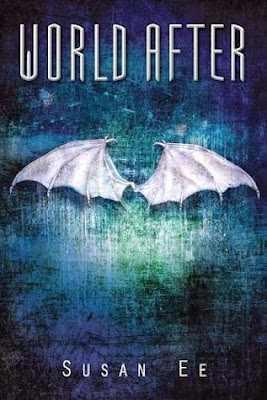 In this sequel to the bestselling fantasy thriller, Angelfall, the survivors of the angel apocalypse begin to scrape back together what's left of the modern world.
When a group of people capture Penryn's sister Paige, thinking she's a monster, the situation ends in a massacre. Paige disappears. Humans are terrified. Mom is heartbroken.
Penryn drives through the streets of San Francisco looking for Paige. Why are the streets so empty? Where is everybody? Her search leads her into the heart of the angels' secret plans where she catches a glimpse of their motivations, and learns the horrifying extent to which the angels are willing to go.
Meanwhile, Raffe hunts for his wings. Without them, he can't rejoin the angels, can't take his rightful place as one of their leaders. When faced with recapturing his wings or helping Penryn survive, which will he choose? (From Goodreads)
_____________________________________________________________________

And out of the smoke locusts came down on the earth and were given power like that of scorpions of the earth...Their hair was like women's hair, and their teeth were like lions' teeth. They had breastplates like breastplates of iron, and the sound of their wings was like the thundering of many horses and chariots rushing into battle. They had tails with stingers, like scorpions.


1) World After begins when Angelfall ends. The exact moment. It is the world after the angel invasion (see how that title works). The Resistance has just attacked the Aerie, Penryn is completely paralyzed but the scorpion attack and Raffe is wearing bat wings and desperate to get his feathers back.

2) Penryn is my hero. She is no-nonsense, low on drama, calculating and completely bad ass. But she also has insecurities about her sister, feels overwhelmed by the responsibility placed on her and gets a little giddy when thinking about Raffe. I love how real she is in this book.

3) Raffe and Penryn together are magic. The two of them have a chemistry that lights this book on fire. Although there are tremendous obstacles in the way of any sort of future for them, and I'm not at all certain that there will be one, what I love is the growing emotional and trust bond between them. Watching them fight together is something to behold, but they also have some great moments of banter, humor and camaraderie. Unfortunately, there's a large part of this book when these two are not together. Fortunately, we still get to see Raffe in some pretty unique ways. And when he shows up, the sparks fly.

4) We get answers. World After gives us a lot of answers about events/details that happened in Angelfall. Why Raffe acted certain ways. Why the apocalypse was so deadly in such a short time. What are these scorpion creatures and where do they come from? We are also starting to get some answers and motives from the angels. Why they've come to earth and how they were able to accomplish their mission as swiftly as they did. Even though Raffe is gone for much of the book - and the story is in Penryn's perspective - we also get more insight into what he's doing and also his past through a pretty interesting method. I could much better understand the push and pull within him, especially his hesitation and the true danger of pursuing anything with Penryn.

5) This book ups both the horror and the human moments. World After is a lot bloodier than its predecessor. This one moves more firmly into the horror category. It gets even scarier when the scorpions return and Penryn begins to realize what exactly the angels are planning, especially the way the book of Revelation and the Day of Judgement are being used. This book also has several very cinematic and epic battle scenes. The masquerade party and ocean fight were my favorites. But Ee masterfully balances those with smaller personal moments, like when Penryn and someone else camp in a beach house. You will never look at a jar of peanut butter the same way after this book. The simplest actions can be heavy with tension.

6) Paige is no longer the same wheelchair bound girl that Penryn remembers. She's been cut and stitched into a truly frightening appearance, and doesn't seem to be able to eat regular food. In some ways Paige is still Penryn's little sister, but she's also lost her innocence in a violent way, and is a visual look at the horrors of the utter lack of humanity that some of these angels and demons possess and how little they value humans. Paige plays a much larger role in World After and there are several important revelations about her that direct the plot. I thought her part of the story was going to go one way, and then it shifted and really surprised me at the end. I don't think it's an exaggeration to say that Paige is a key to this series.

7) Characters. This series has a small but core group of characters that Ee is slowly fleshing out in this story. In addition to Penryn, Raffe and Paige, we get more of Paige's mom who is off her meds and continuing to cause problems for Penryn. But though Penryn comes to terms with the fact that her mother is not well, Penryn begins to see her as helpful in her own way. We also see Penryn befriend and interact with more people outside of her family, and through that we watch her discover both the beauty and the ugliness of humanity.

8) A broader perspective. While Penryn was almost solely focused on saving her family in Angelfall, in World After she gains a broader perspective and realizes something must be done to save all of mankind. She also begins to understand the responsibility she has undertaken to play a role in that. But Penryn doesn't just interact with humans, she sees many familiar angel and demon faces again. Even the 'bad guys' that have nefarious plans, came across as more real and I could much better understand their desires and motives. It added layers of complexity to the plot.

9) Not perfect. As much as I enjoyed this series follow up, I felt like there were a few obvious plot details in this book - like the note that Penryn writes for the boat captain. When she was writing the note I thought it was a strange move, but later I realized why it worked in the plot. Although I enjoyed traveling through more of California, many of the scenes and themes echo those from Angelfall (i.e Penryn goes to another party at an Angel aerie etc.). I also wanted a little more Raffe, though that's more of a desire than a criticism. Thankfully, Ee made his scenes count.

10) I can't wait for more. It seemed like the plot was only just beginning, when the story was ending. Despite it's page numbers in the 300s, World After was a quick read and I was aching for more. I can't wait to find out how Ee solves this huge angel predicament.

Love Triangle Factor: None
Cliffhanger Scale: Low-Medium. Revelations at the end, but the story stops at a place that doesn't cause unnecessary anxiety.

Anybody know whether this is going to be a trilogy or more?