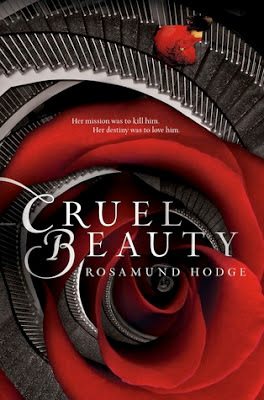 Based on the classic fairy tale Beauty and the Beast, Cruel Beauty is a dazzling love story about our deepest desires and their power to change our destiny.
Since birth, Nyx has been betrothed to the evil ruler of her kingdom-all because of a foolish bargain struck by her father. And since birth, she has been in training to kill him.
With no choice but to fulfill her duty, Nyx resents her family for never trying to save her and hates herself for wanting to escape her fate. Still, on her seventeenth birthday, Nyx abandons everything she's ever known to marry the all-powerful, immortal Ignifex. Her plan? Seduce him, destroy his enchanted castle, and break the nine-hundred-year-old curse he put on her people.
But Ignifex is not at all what Nyx expected. The strangely charming lord beguiles her, and his castle-a shifting maze of magical rooms-enthralls her.
As Nyx searches for a way to free her homeland by uncovering Ignifex's secrets, she finds herself unwillingly drawn to him. Even if she could bring herself to love her sworn enemy, how can she refuse her duty to kill him? With time running out, Nyx must decide what is more important: the future of her kingdom, or the man she was never supposed to love.
___________________________________________________________________________

Since birth, Nyx has been betrothed to the Gentle Lord, the evil ruler of her kingdom of Arcadia, all because of a foolish bargain struck by her father. And since birth, she has been in training to kill him. When Nyx's wedding day comes and she is suddenly married to and trapped in Ignifex's beguiling house, she discovers that nothing, including her husband, is what she expected (adapted from Goodreads).

What I love best about this book, is how the author plays with the tale of Beauty and the Beast, especially in the complexity of the main characters. There is much less of a focus on Ignifex's (Beast's) physical appearance, and more on the evil and darkness that surrounds his character. Whether or not the perceptions about him are true, no one would presume to call Ignifex a Good Guy. Nyx is also not simply an innocent Beauty. She has been trained her whole life to sacrifice herself for her people by killing the monstrous Beast. She is driven, starved of love, and recognizes the darkness that lives her own heart. Especially her anger and hatred at her family for forcing her into this role.

The setting of Cruel Beauty is also fascinating. Based on Greek mythology, this world is in many ways a creation all its own. The island of Arcadia resides within what, from the inside, looks like a parchment paper dome, protected from the outside world but also separate from it. No one knows exactly what happened 900 years ago when the Sundering began, but Nyx's father believes that she can break it when she destroys the Gentle Lord. Of course as is the case in all stories, nothing is as simple as it seems, and that's when the wonder of this book unfolds.

There are very clear bones from the Beauty and the Beast plot within Cruel Beauty, but this is also very much an original tale. In the second half of the book, the plot especially takes off. It is surprising, twisty, strange and exciting. A lot happens near the very end that had my head spinning - in a good way - though I do wish that a few elements had been explained a little better. I also very much like the strength and complexities in Nyx's relationship with her sister, and the ways that directs some of the action in the book.

My biggest struggle when reading Cruel Beauty was the presentation of the character of Shade, the only other being that Beauty encounters when she is inside Ignifex's house. I'm going to talk a lot about this because it really bugged me. I recognize Shade's importance but I didn't like the way he was portrayed or how his relationship with Nyx progressed. Of course, my love triangle radar started beeping right away, but it wasn't completely that which bothered me. I didn't like Nyx's near instant trust of Shade, the way she supposed a lot of things about him, which he wasn't able to confirm or deny, and the way Nyx's interactions with him shifted focus away from what was far more interesting to me - the mythology, her task and Ignifex. I was suspicious of Shade from the beginning, which made Nyx's immediate assumptions and trust in him tough for me to understand.

If you dislike love triangles as much as I do, I have a feeling that his character will bug you as well. If triangles don't bother you so much, I doubt it will be a problem for you. The good news is that in the second half of the book, the Shade situation becomes a non-issue. Nyx's romance with Ignifex develops slowly and is lovely to watch, compared to that, her relationship with Shade was jarring.

Even taking into account what I said in the last two paragraphs about Shade, Cruel Beauty is an edgy, imaginative and thoughtful retelling of Beauty and the Beast. I definitely recommend it.