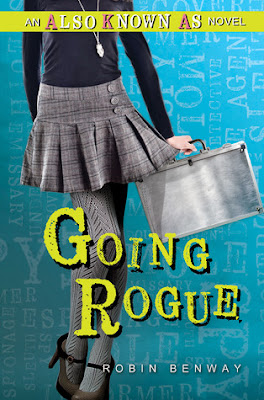 Being permanently based in a local New York City high school as an undercover operative has its moments, good and bad, for 16-year-old safecracker Maggie Silver. Pros: More quality time with her former mark-turned-boyfriend Jesse Oliver and insanely cool best friend, Roux. Getting to spend quality time with her semi-retired and international spy honorary uncle, Angelo. Cons: High school and the accompanying cliques, bad lunches, and frustratingly simple locker combinations. But when Maggie's parents are falsely accused of stealing priceless gold coins, Maggie uses her safecracking skills to try and clear their names. Too bad it only serves to put her and everyone she loves in danger. Maggie and her "new team" flee to Paris where they must come up with a plan to defeat their former allies.


NOTE: See my review of book 1 in this series Also Known As, HERE

Going Rogue is the second book in Robin Benway's Also Known As Series. In my review for the first book, I declared it to be a perfect palate cleanser, and I'd say exactly the same for this one. Overall, this book was light, fun, exciting and low on angst.

Maggie and her parents are spies for an organization called The Collective. It used to be that her family traveled constantly and she didn't have a permanent home or friends. That all changed after her last job in New York City. Now Maggie's former mark Jesse is her boyfriend, she has a best friend named Roux, and she's (mostly) turned into a regular high school student, including SAT prep. Then Maggie's parents are falsely accused of stealing priceless gold coins and everything changes again.

In Going Rogue, Maggie realizes the consequences of being a safe cracking spy with friends. Not only is her family in danger, but they are too. This causes a lot of stress for Maggie, and also some tension with Roux and Jesse when she tries to protect them by hiding things from them. But thankfully her mentor/'uncle'/spy master Angelo is always there to set Maggie straight, and she begins to realize that they are better off all together. Thankfully, despite this set back, Going Rogue book is wonderfully low on relationship drama. Maggie and Jesse are young and have to figure out how to navigate through Maggie's very dangerous job. But they are thankfully committed to seeing it through. Plus Roux provides some much needed hilarity.

I particularly liked the moments in this book when Maggie, Jesse and Roux have to work together, and I'm hoping that there are more of these in the next installment (if there is one). My initial hesitation in this story was that I wanted these three to 'go rogue' together and form their own spy group. It doesn't exactly work out that way. Even so, I enjoyed the new characters introduced and the way that Jesse and Roux were included in everything.

I also enjoyed the travel to Paris, though I wanted a bit more international spying. I felt like everything was just coming together - the new characters, intrigue and action - when the book ended. In my head, I keep comparing these books to Ally Carter's Heist Society series, and I like those better, but Benway's books are fun and I'd read another one.