Everyone had really great points to make on my How Do You Define a Love Triangle post, and I wanted to share some with you here. Then I need to stop talking about this topic, because if I'm getting tired of it, I'm sure you are too.

I'm also unveiling my new Love Triangle Free Zone button that the amazing Jenny @ Supernatural Snark made for me. I love love love it so much. I've also put it on my sidebar with a link to grab, if you'd like to live a love triangle free lifestyle as well. 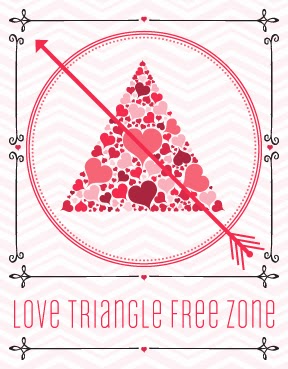 What is a love triangle?


A triangle, in my eyes, is when there are two guys competing for one girl and she has genuine feelings for both of them and just can't make a decision (or a guy with two girls, though I haven't read a book with that type of triangle yet)...If the girl's feelings are clear, even if there are two guys present it's still not a true triangle for me because she's not confused. She knows who she wants, it just might not be possible at that point in the story. ~ Jenny


I agree with this, Jenny! Though when a first book in a series is set up with two possible love interests, even if the heroine only wants one at this point in the story, usually it means that she is going to eventually do some wavering. Or the reader is at least going to be led to believe that she will waver, which is often just as stressful for me. Sometimes an author pulls off this situation well, without falling into a triangle trap, and I always think those books have more to offer.

All these types of love triangle hurt my head! Why can't they just all go away? But going through the different types, I agree that some of them didn't even feel like a triangle to me... Overall, I would prefer there to be no triangle at all, but if it has to be there, then I'd want to heroine/hero to be smart enough to make a decision within one book and stick with it. ~ Aman

I know no one is perfect, and mistakes in love are part of life, but I agree, carrying out a triangle over an entire series rarely is necessary or realistic, especially when the integrity of the heroine is sacrificed to keep a reader guessing until the end.

I don't think most books are really written as true triangles, which I define as someone well and truly caught be between two characters she's equally drawn to in different ways. This is why they are rarely interesting, because most "triangles" don't feel emotionally authentic and feel more like obstacles added to create romantic annoyance. I mean, tension. ~ Wendy

YES, Wendy! Also, I agree with the fact that fake triangles are annoying and often just a plot device. I'd even argue, that that there's a fine line between whether a book has a triangle and whether an author/publisher wants you to think a book has a triangle. Even though most books don't have true triangles, they're still being promoted has having a "triangle" or at least "teams" that the reader needs to choose. This hype just leads to more drama and a drawn out decision that gets old fast.


There have been love triangles that I never consider a real triangle because the choice was obvious to me. ~ Sara @ Forever 17 Books.


I tend to agree with this, Sara. The Best Friend On Hold model, especially, rarely seems like a true triangle to me. Or at least, It bothers me less than some of the other models, probably because I'm not usually worried whom the heroine will eventually end up with. However, my former confidence has been wavering a lot, in the wake of some surprising (to me) recent ends to love triangle series. This has made me even more determined to avoid them. I wonder if some of the series that were fine for me previously, would bother me if I started them today?

Why are triangles so painful?

For me the bitterness of a love triangle comes from the fact that the MC is truly torn between two choices, whether or not she prefers one, and that act of being so confused and leading on two guys is what irritates me. If a guy is simply there because the MC is grieving (like in The Sky is Everywhere) I can forgive her and I can also get behind her if she's loyal to one guy and someone else just happens to like her which is out of her control, but either than that it's definitely a love triangle for me. ~ Keertana

I don't mind the Love T, as long as there isn't any wavering happening. I think it often adds some great tension. I also wouldn't call the Make-Out Buddy an official love triangle. However, that model bugs me a lot and I usually don't enjoy experiencing it. BUT I wouldn't call it a "triangle," and thankfully it usually resolves within one book.

To be honest, every single one of these annoys me, ha! I guess the love T isn't so bad... but I usually end up hating that third party, when he (she) could have actually been a great character otherwise. I can't stand the fact that again and again romantic tension has to come from the outside in the form of another person. It's unrealistic and kills the romance for me. :( Where's the loyalty? ~ Danielle

I know neither of us likes love triangles in general, Danielle. But I agree that they have been overused recently, and that my favorite stories create tension in other ways than including a triangle. It's starting to feel like a bit of a cop out to me.

It's not like I need a happy ending every time. I just need to know there's peace among the characters I care for --more so if romantic feelings are involved. ~ Marlene C.

I prefer HEA. But I completely agree that series that drag out triangles until the bitter end are rarely emotionally satisfying. Usually the heroine looks bad and one of the choices gets majorly shafted. After working so hard to keep the reader guessing and investing in multiple parties, this is disappointing.

How do so many characters let themselves get drawn into triangles?

Honestly, if I was one of the boys in these love triangles and some girl was having a hard time choosing between me and some other guy, I would quickly delete my name from the multiple choice exam she seems to be taking. ~ Monique Morris

I can't stand it when a character spends a whole book (or series *shudder*) vacillating between two love interests. It doesn't make sense to me that a character wouldn't make a choice (A, B, or C (neither)), and it makes even less sense that choices A and B are willing to stick around and wait for this indecisive person to make a choice. ~ Kel @ No Cucumber Sandwiches

Both of your comments made me laugh, because they are so true. I don't understand how these YA guys get suckered into triangles over and over again, especially with girls who often describe themselves as 'plain' and who never had a guy look at them twice before. When a triangle gets to the point that a heroine looks bad because she's been leading on two guys for so long, I wish the guys would just give her the boot.

Overwhelming dislike for the Blindside and the Middle Book Tension Triangle.

I won't read a book if a love triangle is a feature, which is why I feel conned when it shows up halfway through. Allie @ Little Birdie Books

I HATE "the blindside" with a burning passion. I mean, come on, I don't need any more of those in my life! … The "middle of the book tension".... *cringes* I can't stand those. ~ Christie

For me, the worst love triangles are the ones you mentioned that drag on and on and keep us guessing until the very end. I can't deal with those types any more. I'm also not a fan of the guy that pops up in book two in order to create additional tension between our main couple and put them on the outs before they reconcile in book three. ~ Jenny

Love triangles make my brain melt. And the ones that show up MID series? I can't even ... WHY?! It's like I've been tricked! Allie @ Little Birdie Books


YES! To all of this. I'm so bad at waiting to start series until multiple books are out, but it's crushing to experience a mid-series triangle. It's even worse when it's clear that they're just added for tension. I'm liking this new trend towards duets, though. Less time for a triangle to happen - or drag out.

On authors' reactions to the love triangle madness.

"It's always funny when I discuss this with authors and they don't even think they've written [a love triangle]. They know in their head what happens in the end so it seems more like a minor detour while we're all having heart attacks over the eventual decision." Karen


I've noticed this too, Karen. I went to an event last year featuring two authors of very popular/polarizing Love Triangle series (polarizing in that they their audience is split into very prominent and vocal "teams"). Both authors said that they didn't think their stories had a triangle. I was like???? Even though an author knows the way her story is going to go, when she or her publisher tries to set up readers to pick a 'team' that carries throughout a series, keeping the reader guessing until the end, I think that's 100% a triangle.

These blurbs must be written for someone else.

I think we're screwed. Those blurb writers seem to think that we like the triangle. Silly blurb writers. ~ Mary @BookSwarm

I am totally with you about misleading publishers! >.< Not just concerning love triangles, though. I have a shelf on GR that's called "avoid until sequel releases." If the sequel has a love triangle or cliffhanger I don't bother. It's saved me quite a bit of heartache in the past, at any rate. ~ Keertana

I've almost completely stopped reading summaries right before I pick up a book because I don't want to be misled about a possible triangle. And it seems like those who write the descriptive copy think we all WANT love triangles because I've been misled that way and recently, too. *sigh* But I still agree that we should at least get advanced warning of a triangle so we can decide if it's worth it or not. ~ StarryeyedJen


I'm not sure why some blurb writers push the triangle and some try to hide it. Definitely a mystery! Jen, I think you have the right idea of avoiding blurbs, because they can be misleading. I tend to trust a reviewer's comments more - that's why I'm always coming to you and others for your opinion. Also, Keertana, you're right, blurbs can be misleading in general. Though that's a topic for another day. I LOVE your shelf idea. I need to check that out.


Do you agree, want to add anything?