Prodigy and Champion by Marie Lu 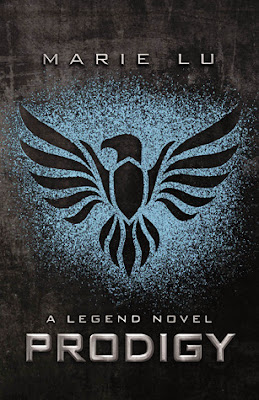 When Prodigy released a year ago, I hesitated reading it right away for a variety of factors. 1) My interest in dystopians was already waning and I wasn't hugely impressed with the world described in Legend. Although the gritty LA setting was interesting, I didn't understand the broader society. 2) I thought June and Day were incredibly young for all of their accomplishments. 3 & 4) Exacerbating the first two issues were talks of a dreaded love square developing in the second book, and the entire story culminating in a crazy cliffhanger.

Because of those issues, I decided to hold off starting this book until the final released, and either read them both together or skip them all together. After hearing so much praise about Champion, I decided to keep reading. I'm glad I did. I ended up really liking this book. The broader world and political atmosphere were much better developed, and ended up being quite interesting. This society also felt possible, where a lot of dystopian books seem like complete fancy.

Although I did not care for the love quadrant that forms, thankfully it's not that strong. I get that the author was trying to show that June and Day come from different worlds and might be more compatible with others. But in light of everything else happening, it felt slightly unnecessary, especially the Tess side of it. Still that didn't drag down this book (much). I still think June and Day are so so young, but I've grown attached to them, and I very much want them to succeed. Of course because I had book three in hand when I started Prodigy, the cliffhanger was a non-issue. 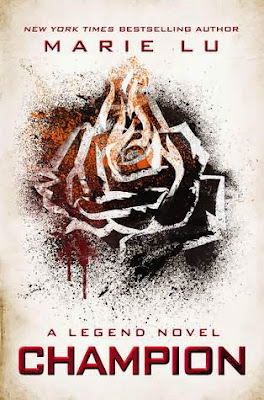 He is a Legend.

She is a Prodigy.

Who will be Champion?
June and Day have sacrificed so much for the people of the Republic—and each other—and now their country is on the brink of a new existence. June is back in the good graces of the Republic, working within the government’s elite circles as Princeps-Elect, while Day has been assigned a high-level military position.
But neither could have predicted the circumstances that will reunite them: just when a peace treaty is imminent, a plague outbreak causes panic in the Colonies, and war threatens the Republic’s border cities. This new strain of plague is deadlier than ever, and June is the only one who knows the key to her country’s defense. But saving the lives of thousands will mean asking the one she loves to give up everything.
With heart-pounding action and suspense, Marie Lu’s bestselling trilogy draws to a stunning conclusion.
__________________________________________________________________________

I read Legend exactly 2 years ago, and though I read a recap before starting Prodigy, I don't really have a strong memory of that part of the story. I think that hurt my connection to the end of this book a bit. In other words, this series is best read close together. Despite that, Champion is a thrilling conclusion.I was riveted to this book from beginning to end and couldn't turn the pages fast enough. The world and political, societal climate Lu has created is fascinating and well developed. This is a dystopian-like (post apocalyptic-like? - not sure about how to categorize) world that I could see happening to our own if similar factors were in place. In other words, the world building is well thought out - almost eerily so. Where my feelings for some of the secondaries in this series were once black and white, I found so much complexity in the way each was written: Thomas, Metias, Eden, Tess, Anden, Pascao, even Commander Jameson. They truly made this story more complex, and several of my favorite moments in Champion feature one of them. Still I am announcing an official breakup between me and the dystopian genre. It's really wearing on me. Especially all the revolution and war that happens. The way it's portrayed in Champion is honest and realistic. But the constantly high body count and country upheaval is tough and getting repetitive in this genre. I almost didn't continue this series after the first installment because of that, but I think these books have turned out to be a favorite of the dystopians I've read, especially because the plot didn't always go in the predicted direction after book one. I'm glad I was convinced to keep reading. We get to see both June and Day grow up in Champion, which I greatly appreciated. They were so young in the first one. Despite the fact that they come from very different backgrounds, they keep finding their way back to each other, which speaks loudest of their connection. I've been waiting for swoons to rival that bathroom scene at the beginning of Prodigy and these two don't disappoint. But I think it's their actions and not their words that are the strongest indicator of how much they care for each other. I can understand why some people love the end of this book, but others were disappointed. I fell somewhere in the middle of that when I first finished it. But the end has grown on me tremendously as I've had time to step back and consider it. The end is clever and poignant, and I think it's a really smart, good series conclusion that fits these characters well. But it took some time to make myself agree with that emotionally. Don't worry, I think a lot of you will LOVE it. Thankfully, I can place this series conclusion away from the Bad Endings category that has unfortunately cropped up for me this year.

Finally, would someone kindly explain this title to me? I get Legend and Prodigy, but how does Champion tie to the series? And that tagline "Who will be Champion?" Did one of them win something? What am I missing?Love Triangle Factor: Mild (Mild also for the series)Cliffhanger Scale: Series conclusion